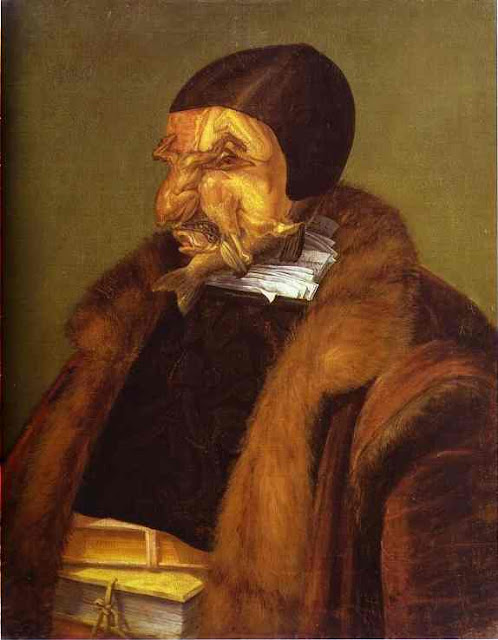 Fragments of Fairytales (an occasional feature)

I came upon these delightful illustrations by Arthur Rackham for J.M. Barrie's book Peter Pan in Kensington Gardens. I hope you enjoy them. Many thanks to the author of the site Art Passions for the collection of illustrations and to fullbooks.com for the free ebook version of the novel, from which I borrowed the excerpts. It's a short story and if you tend toward the fanciful, as I do, you will enjoy it, also!


As you will see, Barrie and Rackham's Peter is a far cry from the animated Disney character. 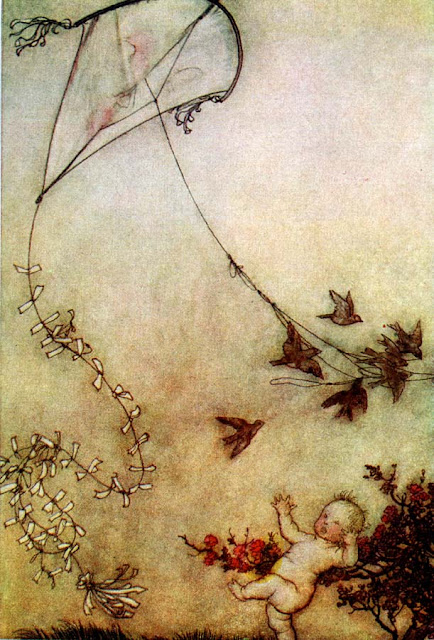 The story takes place in Kensington Gardens, a famous park in London, mostly after "Lock-Out Time", described by Barrie as the time at the end of the day when the park gates are closed to the public. After this time the fairies, and other magical inhabitants of the park, can move about more freely than during the daylight, when they must hide from ordinary people.

In Peter Pan in Kensington Gardens, J.M. Barrie first created Peter Pan as a baby, living a wild and secret life with birds and fairies in the middle of London. Later Barrie let this remarkable child grow a little older and he became the boy-hero of Neverland, making his first appearance, with Wendy, Captain Hook, and the Lost Boys, in Peter and Wendy. The Peter Pan stories were Barrie's only works for children but, as their persistent popularity shows, their themes of imaginative escape continue to charm even those who long ago left Neverland.


Well, Peter Pan got out by the window, which had no bars. Standing on
the ledge he could see trees far away, which were doubtless the
Kensington Gardens, and the moment he saw them he entirely forgot that
he was now a little boy in a nightgown, and away he flew, right over
the houses to the Gardens. It is wonderful that he could fly without
wings, but the place itched tremendously, and, perhaps we could all
fly if we were as dead-confident-sure of our capacity to do it as was
bold Peter Pan that evening. 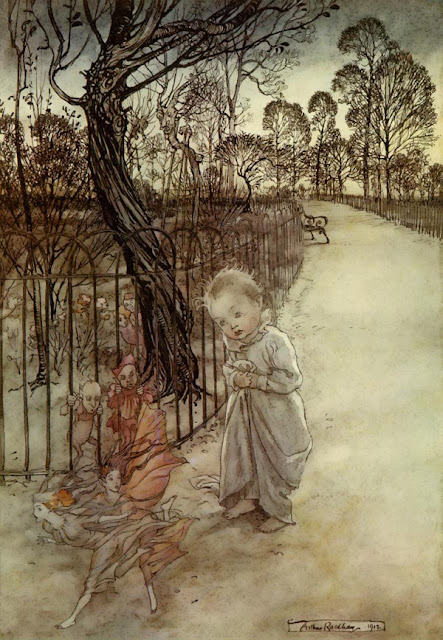 Because the fairies are afraid of him, Peter, still believing he can fly, does so to the little island across  Serpenstine Lake to consult with Solomon Caw,who tells him:
Then I shan't be exactly a human?" Peter asked.
"No".
"Nor exactly a bird?"
"No."
"What shall I be?"
"You will be a Betwixt-and-Between," Solomon said, and certainly he
was a wise old fellow, for that is exactly how it turned out. 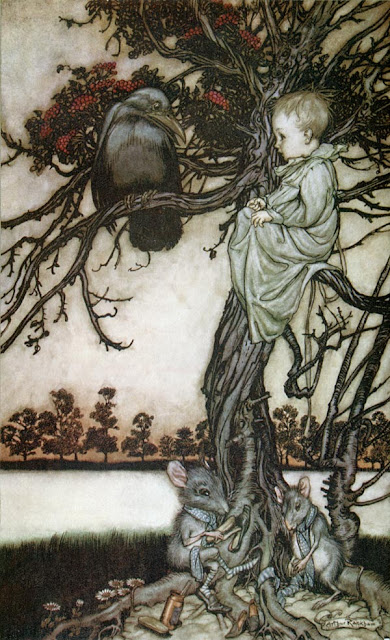 Once he learns that he really can no longer fly, Peter, with the help of the birds, fashions a boat on which to get back across the Serpentine Lake and back to Kensington Gardens, which he so dearly misses. 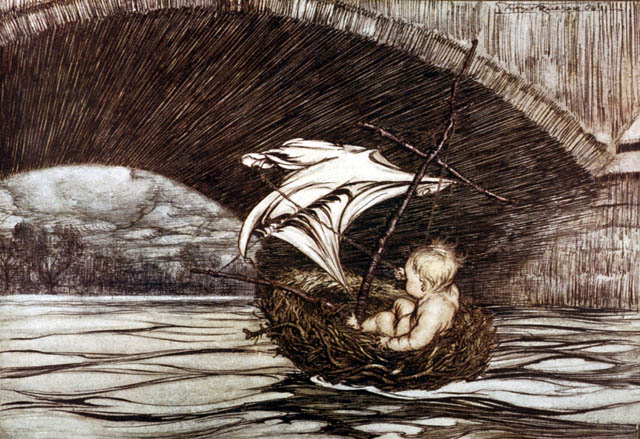 It is frightfully difficult to know much about the fairies, and almost
the only thing known for certain is that there are fairies wherever
there are children. Long ago children were forbidden the Gardens, and
at that time there was not a fairy in the place; then the children
were admitted, and the fairies came trooping in that very evening.
They can't resist following the children, but you seldom see them,
partly because they live in the daytime behind the railings, where you
are not allowed to go, and also partly because they are so cunning.
They are not a bit cunning after Lock-out, but until Lock-out, my
word! 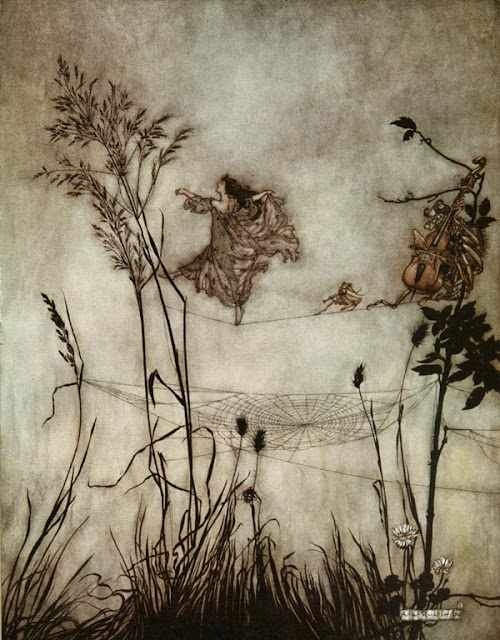 The fairies are exquisite dancers, and that is why one of the first
things the baby does is to sign to you to dance to him and then to cry
when you do it. They hold their great balls in the open air, in what
is called a fairy-ring. For weeks afterward you can see the ring on
the grass. It is not there when they begin, but they make it by
waltzing round and round. Sometimes you will find mushrooms inside
the ring, and these are fairy chairs that the servants have forgotten
to clear away. The chairs and the rings are the only tell-tale marks
these little people leave behind them, and they would remove even
these were they not so fond of dancing that they toe it till the very
moment of the opening of the gates. David and I once found a
fairy-ring quite warm. 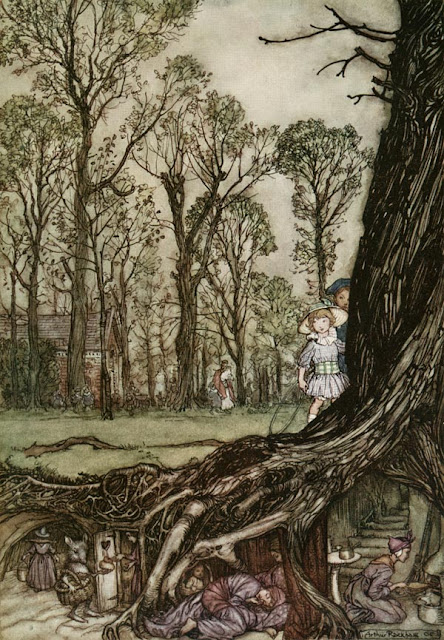 The Fairies would hide until dusk 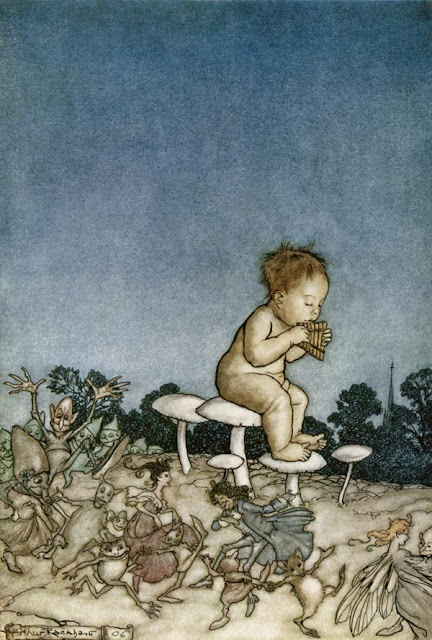 The fairies, no longer afraid of Peter, dance to the music of his pipes... 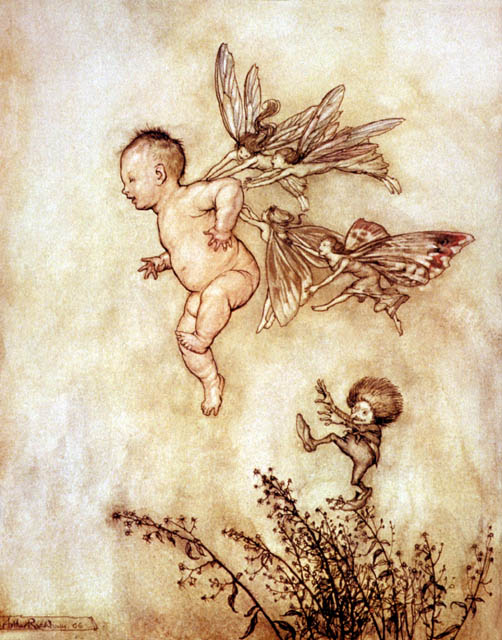 and later, teach him to fly again, so that he may go back home to be with his mother.

The way they
gave him power to fly was this: They all tickled him on the shoulder,
and soon he felt a funny itching in that part and then up he rose
higher and higher and flew away out of the Gardens and over the
house-tops. 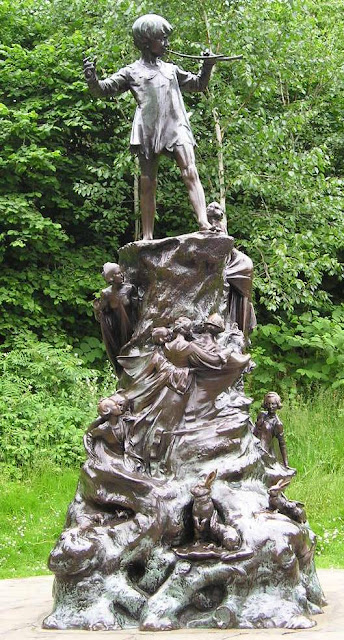 There is a statue of Peter Pan in Kensington Gardens. The statue was erected in secret during the night and 'magically' appeared on 1st May 1912.
There was no publicity before the statue's arrival and on the day, Barrie placed this announcement in The Times:


"There is a surprise in store for the children who go to Kensington Gardens to feed the ducks in the Serpentine this morning. Down by the little bay on the south-western side of the tail of the Serpentine they will find a May-day gift by Mr J.M. Barrie, a figure of Peter Pan blowing his pipe on the stump of a tree, with fairies and mice and squirrels all around. It is the work of Sir George Frampton, and the bronze figure of the boy who would never grow up is delightfully conceived."

I'm putting this out quickly and therefore I'll be laying it right on the table. This post on my blog friend libhomo at Godless Liberal Homo site on Marie Osmond's son's suicide really hit home. I believe I have to agree with his opinion on this. Here's why.

You may or may not know that my daughter, now 22, happily married and working her way toward graduate school, is a lesbian who came out as "bi-sexual" at age 16. As if the rejection of several of her peers, physical and emotional abuse at the hands of her then boyfriend who become irate and deranged when she told him she thought she might actually be a lesbian and not bi-sexual after all, and a parallel bi-polar episode, weren't enough to make her want to kill herself  -  add to that the what-if of if I were a strict Mormon and added the beliefs of my screwed up church to conservations with my daughter, even while I loved her. I would have lost her to suicide. I know that with every fiber of my body. I know myself and there is no way I would choose a church's doctrine over my child's life and well-being. 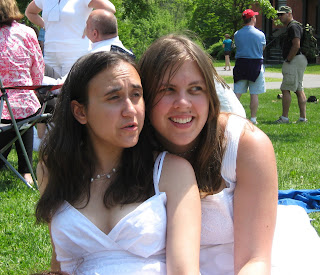 My daughter and daughter-in-law, taken during their college graduation week-end in 2009
Be aware that the Mormon church continues to advocate the use of Electro-Shock Therapy for people who are coersed into "treatment" because of their "problem" which had to be caused by the individual him or herself.


I feel for anyone who loses a child and I encounter the affects of that hurt every time I interact with WP's sister who lost her 25 year-old daughter to suicide in 2005. I know the pain my family and I went through knowing our daughter didn't want to live anymore. What I can't understand is why a person can't wrap their heads around the situation and understand that they have to do everything they can to save their child. If one's child is physically ill and needs many changes in order to live, wouldn't you go to the ends of the earth to try to eliminate or add anything you could possibly think of to save them or even to make them comfortable? Then why not chuck the church and the toxic friends and open lines of communication in order to save your child?


If I were a gay teen living in a strict Mormon household, I'd kill myself too.
Posted by Unknown at Sunday, March 07, 2010 11 comments: