Who Will I Give My Twenty Bucks To? 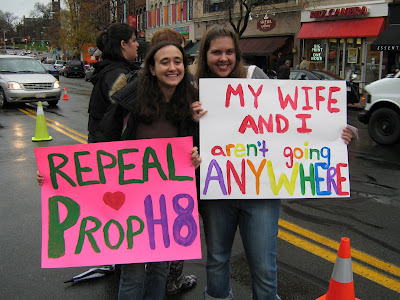 Don't get me wrong about Barack Obama. I supported his campaign by sending a little dough and I hoped with everything I had that he would make it. He's the single most inspirational American politician to come along in my lifetime. I hold out a lot of hope that he will work hard to get this country back on its feet economically and that he will work through diplomatic chanels before resorting to more violence in with Iraq.

Despite this, today I was confronted with two emails asking for money. One from the Obama campaign asking for a donation toward making the inaugaration a success and one from The Human Rights Campaign asking for money to keep on fighting for equal rights for all Americans; including marriage equality. Anyone who knows even a little about me can probably guess which campaign I sent money to. It was only $20 but I'll keep dishing it out in dribs and drabs for as long as it takes.

Because when it comes to GLBT issues, the Obama campaign and transition team have been a large disappointment. Not that I held much hope that this issue would have much backing from Obama and Biden, both lukewarm supporters of civil unions; which don't do nearly enough to socially sanction GLBT partnerships, never mind protect them legally.

And then there is the matter of Rick Warren's participation in the inauguration. Yeah, I'm still sore about that. I think it's inappropriate that someone who has said such negative things about marriage equality should hold any position of importance and relevance at the inauguration of a president whom I thought would, at the very least, not give homophobes a spotlight at such an event. I already posted about this here, so I won't go on and on.

Suffice it to say that if our new president was the living embodiment of Martin Luther King Jr. and he held the position he does, I would still get after him on the issue of equal rights for GLBT people. Especially and not in spite of, the fact that Obama is African-American. Since it wasn't too long ago in our history that black Americans weren't allowed to marry; nor could a white person marry a black one.

This inability to see marriage in a progressive light is either due to religion or bigotry or both. If a president who is supposed to represent change can't see that civil unions discredit GLBT relationships when what they're asking for is marriage; when a president invites a known anti-marriage figure to perform a convocation on his behalf; when a California constitutional amendment that allows GLBT people to marry is torn to shreds by bigots with lots of money; we know there is a long, uphill battle ahead. We'll get there but I'm afraid it won't happen when my daughter and my gay brothers and sisters are still the victims of vicious intent on the part of religious right-wingers and benign neglect and dismissive actions on the part of a new president.

On a happier note, if you'd like to see what I believe is the last great sunset of 2008 (at least in my neck of the woods, check out my Sky Watch post at The Pagan's Eye. See you there!
Posted by Unknown at Friday, January 02, 2009 24 comments:

A Visit to the Montague Book Mill

A great place to idle the time away... 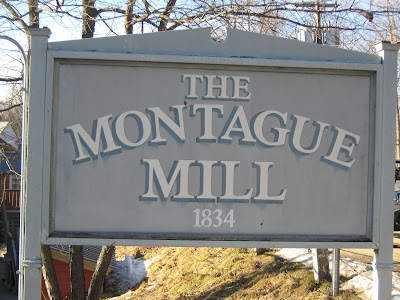 The Montague Bookmill
is a used bookstore housed in an 1842 gristmill, set
on the banks of the Sawmill River, a few miles north of Amherst and
Northampton, Massachusetts 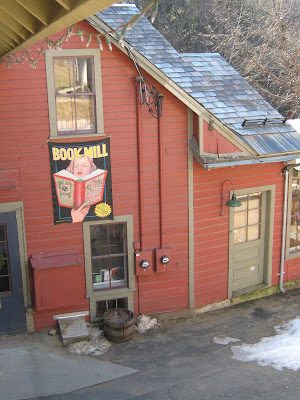 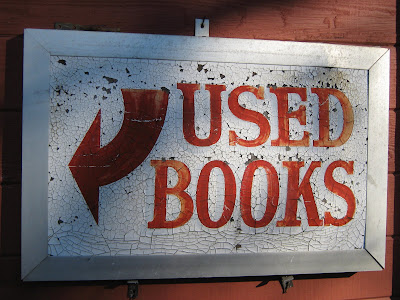 The Bookmill is only a few miles from our house and yet we don't visit often enough. Yesterday it was sunny and crisp; just the type of day to spend some hours in the cozy mill looking at old books 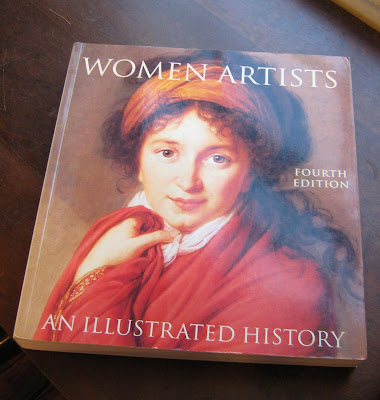 For $19.95 and with an ancient $15 gift certificate I found, how could I resist? The clerk was kind enough to honor it. WP bought a book on deep sea diving; one of his crazy hobbies! 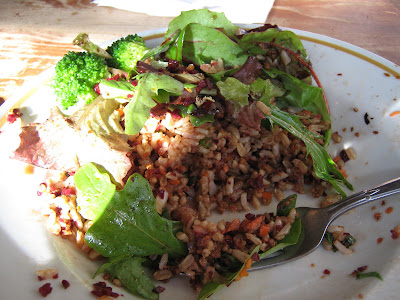 I perused my new book while munching on a delicious brown rice salad from the Lady Killigrew Cafe. It was partially eaten when I decided to photograph it. 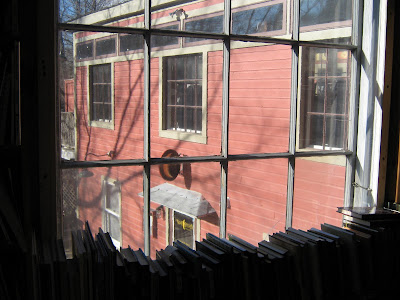 A view of the Sawmill River is available from several windows, though I went outside to take this one. 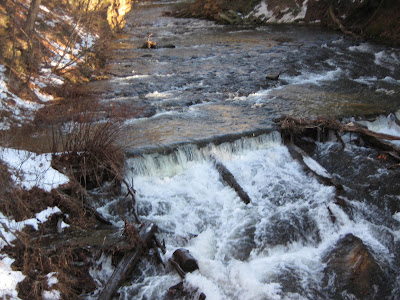 The Tree of Happiness Award

(how luck am I, to know these wonderful people, huh??)
Thank you so much for this award. I will cherish it and keep it always on the blog mantel.

This award has attached a requisite of stating six things that make me happy.
Because anyone who reads TPS knows that my family and my dear WP are who make me most happy, I will concentrate on other things; perhaps even food or something equally inane. I guess I'm not feeling all poetic about happiness today. ;-) We'll see what happens.

Steve's request is that his recipients of the Tree of Happiness Award list att least three of the six things be ones that readers don't yet know about.

1) Once in a while falling asleep to the low tone of the TV set when WP is watching. I don't know what about this makes me happy but it makes me feel safe and contented.

2) Watching the birds and squirrels at the feeders

6) Chocolate (dark truffles but the less exotic Raisinettes and Reeses miniatures will do in a pinch) ;-)
I want to give the award to six people whom I depend upon daily for emotional, spiritual and intellectual sustenance. In other words, food for thought. It sort goes with the food list. ;-)

1) Linda, who is not supposed to be listed because she gave me the award, because she got from someone else, but I insist on including her. She is rich in love and spirituality and shares herself and her wonderful art generously.

2) Bobbie at Almost There. For being there, not almost, but always.

3) Dianne at Forks Off The Moment because everything she stands for makes me happy and proud to know her.

4) Steve at Color Sweet Tooth for his art, friendship and all the learning I do from his comments.

5) Betmo at Life's Journey and Betmo's Corner for her unwavering stand on so many important leftist issues and for her friendship and support. Oh, and the haiku!

6) Sherry at After the Bridge for her poetry, interesting tid-bits and images and her sweetness and friendship

If you haven't done so already, check out their blogs and stay awhile. Treasures abound there!

A Sip of Mass MoCA 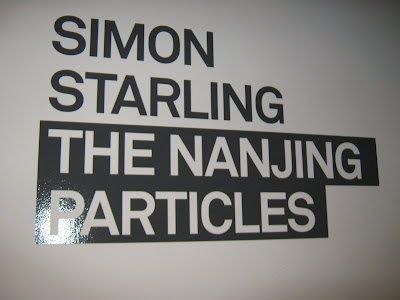 I just posted something similar to Blue Monday (a photo meme) in a themed post but I thought there might be an audience here for the art itself.

These are photos of an installation that's currently at Mass MoCA. One that I wasn't able to completely take in at the time. The large exhibits they feature in their largest space, Gallery 5, sometimes overwhelm me. I did find it fascinating visually and I'd like to return to MoCA before the exhibit ends. If only to see if what I've read about it online will influence how I view it a second time. I suppose it's inevitable. 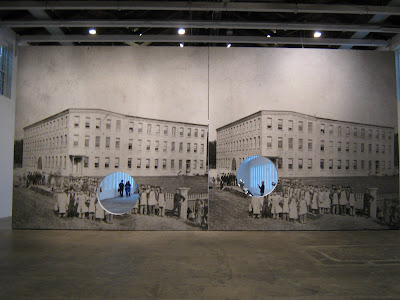 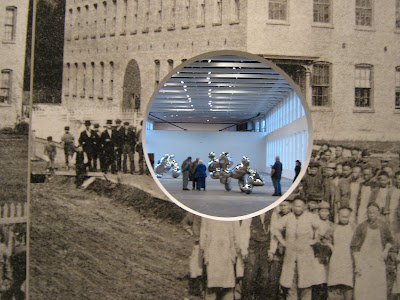 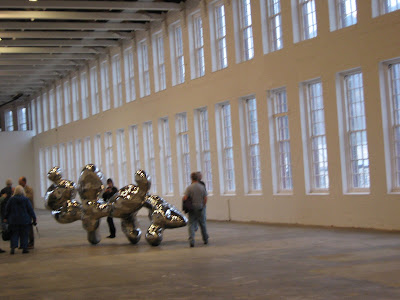 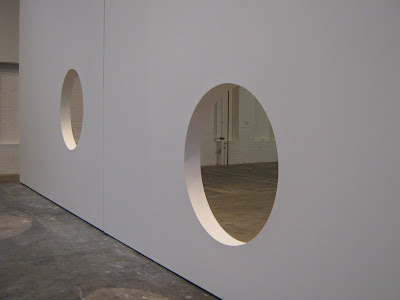 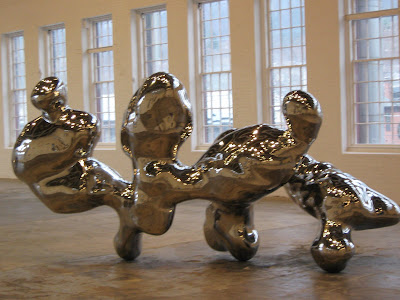 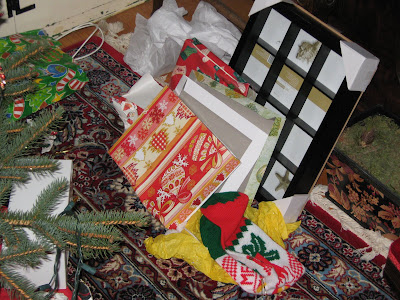 There are a few things I intend to do differently next holiday season. The thing is, I'll have to add them on top of all the other things I did this year. It's something to think about.

One of the things I missed this year was my mother. She spent Christmas 2006 with us and visited this past summer from Portugal but it would have been great to have her around. Still, I know she was in many ways happy to relax and not go on any long trips.

Another thing I intend to try to add; notice the emphasis on try. When TCR and I were married, whether my parents were visiting or not, I prepared a Christmas Eve Portuguese meal of cooked salt cod, potatoes and greens, dressed with olive oil and red wine vinegar and a lot freshly ground black pepper. Crusty bread and white wine are essential with this meal. But in my new blended family, no one likes salt cod and we had extra company this year on Christmas Eve. It was quite busy. I enjoyed it but I'm still having a hankering for that salt cod! I'm hoping to pick some up tomorrow so it will be ready to cook on Wednesday. Sherry really got me going with her Italian family's version of bacalla (salt cod). The squid just about put me over the top with longing for Atlantic seafood. Sherry, won't your relatives agree that the little tentacles are the best part? :-)

Hopefully SG2, who is having four impacted wisdom teeth removed, is well enough to enjoy it. On second thought, I think I'd better wait and see how quickly she comes 'round from the surgery. She's not very keen on the idea and is experiencing a bit of anxiety. It's going to be a tough case for the Nurse Mother. Wish us luck. When all is said and done, if we're still speaking, it'll be a miracle. ;-) She knows I jest.

Another thing to try to adopt next holiday is no presents. None at all. Not even small ones that we agreed upon and some people (you know who you are! ;-) go ahead an buy more elaborate gifts anyway. But I must admit I'm not complaining about the new cordless headphones WP surprised me with. Hooked up to my computer, I can so far walk from the bedroom where the laptop is and into the kitchen to pour more champagne. I don't like it when I start to want too many things. And yes, I've been a bit of a lush for two delicious, decadent days. Hehehe. The fun stops tomorrow. Yup. An aching mouth and minus four teeth later, I will be called upon to nurse duty for sure. I suppose I have to put a twenty under her pillow, too. ;-)

WP, his daughter M visiting from San Francisco and I took a drive over the mountain into North Adams to visit Mass MoCA. It was great entertainment. The company was good. It'so nice to see how happy WP is to have his daughter home for the holidays.

There is a Sol LeWitt exhibit at MoCA that knocked my socks off. There are lots of pictures posted to a Picassa online album. 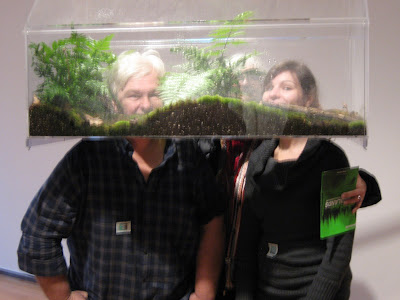 (you can barely see me in the middle; my hand i around Mari)

And stay tuned for a Artist of the Week post on Sol LeWitt. 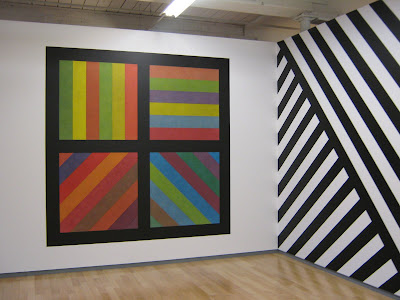