Note to followers:  With this post, I've departed from my usual style of publishing only a lot of a particular artist's works, links to biographical information, articles and exhibitions. I found Spencer's biography so fascinating, that I compiled a write-up based on pieces of his life I garnered from several sources. I'd like your honest feedback on whether you find this too cumbersome or if you enjoyed it and would like to see more biographical information in future Artist Spotlight features. 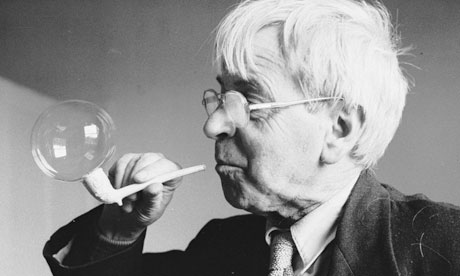 Stanley Spencer was born and spent much of his life in Cookham in Berkshire. When Spencer was seventeen, he enrolled in the Slade School of Fine Art. So profound was his attachment to his hometown that most days he traveled by train back home in time for tea.


" When I left the Slade and went back to Cookham, Stanley wrote, I entered a kind of earthly paradise. Everything seemed fresh and to belong to the morning. My ideas were beginning to unfold in fine order when along comes the war and smashes everything."
~Stanley Spencer


In 1915, Spencer volunteered with the Royal Army Medical Corps and worked as an orderly at the Beaufort War Hospital. In 1916, the 24 year old Spencer volunteered to serve with the RAMC in Macedonia and served with the 68th Field Ambulance Unit. He subsequently volunteered to be transferred to the Berkshire Regiment. His survival of the devastation and torment that killed so many of those around him greatly influenced his attitude toward life and death and imprinted itself in the work that was to come. 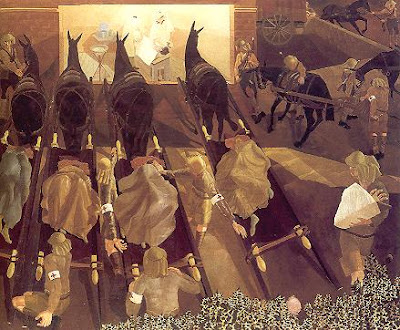 Further influencing his work was his experience toward the end of The Great War, when he was commissioned by the War Artists Advisory Committee. One of the paintings resulting from that commission was Travoys Arriving with Wounded at a Dressing Station at Smol, Macedonia, September 1916, the obvious influence of his work with the medical corps.

"I do anything for these men. I cannot refuse them anything, and they love me to make drawings of photos of their wives and children or a brother who had been killed." 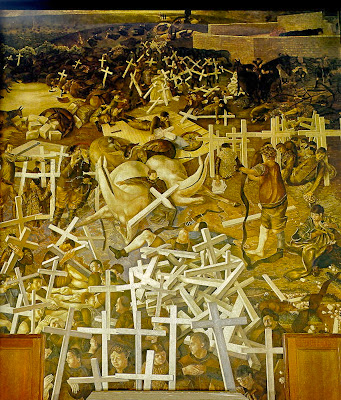 A private commission, The Resurrection of the Soldiers which was to become the alter piece of the Sandham Memorial Chapel in Burghclere, as a memorial to a dead soldier by his family. It would also be the place that housed most of Spencer's war paintings. He  worked on this painting from between 1926-28.


The painting is the eccentric Spencer's view of what happened to the fallen when they reached the heavens, depicting virtually no religious imagery other than the many crosses and one small figure of Christ behind a soldier, submerged beneath the crosses. It may be difficult to see in the image to the right.

Stanley Spencer, one of the great visionary artists of the 20th century is considered by some art critics as possibly the most important modernist painter of the century. And yet, he is virtually unknown in North America. Almost all of his paintings are housed in museums in the United Kingdom or are in private collections.


As a person, Spencer was as eccentric as his work. After the wars, he was seen out and about in Cookham wearing pajamas under his coat in cold weather. Shaggy-haired and frumpy, he would push a pram containing his easel and art supplies through the village.  He was known as an outgoing and spirited man, with twinkling eyes and a vision for the unexpected within the ordinary.

In 1925, Spencer married Hilda Carline, a fellow artist at The Slade. They had two daughters. Hilda was the most important figure in Spencer's life. She embodied for him everything that was essential in life and love. Circumstances in Hilda's family took her away from her husband for long stretches of time and
in 1929, Spender met and became infatuated with artist Patricia Preece.  His wife divorced him in 1937 and four months after the divorce, Spencer married Patricia. The couple never lived together and the marriage was never consummated. Patricia continued to live with her partner and lover Dorothy Hepworth despite repeated requests from Spencer for a ménage à trois. Patricia was Spencer's muse and would often pose nude for him. Throughout their relationship, Spencer lavished Patricia with expensive gifts and money. Their relationship eventually fell apart, though Patricia refused to grant Spencer a divorce. The pain Spencer caused his first wife Hilda, was to be the source of great regret for Spencer, who continued to visit her until her death from cancer, as a way of making amends for how he had treated her.