A Bit of Joni

My daughter and daughter-in-law just returned from a trip to Paris, which reminded me of this song.
I lived in Paris in 1965 and 66 and it's true, they did kiss on main street...and in the subway, the grocery store and especially in the park.  :-x 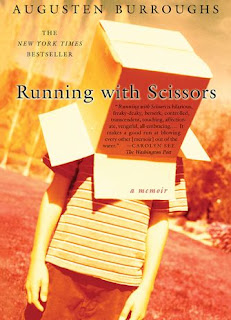 In the early 2000's Augusten Burroughs' memoir Running with Scissors became an instant sensation. Locally, its popularity went over the top, as Burroughs was brought up in Amherst and Northampton. The talk around the book was great enough that I avoided it until after the hype wore off. It was hard to avoid learning things about the book and the author's strange and dysfunctional upbringing. I stuck to my guns, though, as I don't like to read a book or see a film when there is so much of other people's attention focused on it. I like to have a clear and open mind as a reader and draw my own conclusions based on the work itself and not on the swirl of opinions held by others.

Nine years passed and I forgot all about Running with Scissors until a couple of weeks ago when I heard that Burroughs' (that is his nom de guerre) mother Margaret Robeson, much written about in Running with Scissors, had published a memoir in her own defense. A few years ago I  read Burroughs' brother's memoir Look Me in the Eye, about his lifelong struggle with Asperger's, a form of autism. After finding Running with Scissors at my local library, I am now halfway through it and really enjoying it.

The NPR story on The Long Journey Home, Margaret Robeson's recently published memoir, intrigued me for a couple of reasons. Firstly, that three people in the same family should have quite distinct and at times very different perspectives on the same set of events. This is a testament to the complexity of individual experience and its resultant memories and how we interpret both. Secondly, I'll admit to being fascinated by Burroughs' characterization of his mother, who identified herself as a poet and had high ambitions of having her work published in The New Yorker. I'm waiting for inter-library loan of her book to arrive and I'm sure it will be a long wait, as local fans of Burroughs book clamor for it as a means of comparison.

Most memoirs have the feel of vindictiveness or are self-pitying portraits of betrayal and disappointment. Augusten Burroughs' doesn't strike me as self-pitying or vindictive, just as a story he had to write and publish, perhaps as a way of making sense of his strange childhood circumstances. It is also very funny without compromise to the seriousness of child neglect and the dangers of psychological quackery.

Just a bit of background on the snippet, taken from the chapter Pure Projection: at the age of thirteen, Augusten Burroughs was sent to live and eventually became the legal charge of his mother's psychiatrist, given the name Dr. Finch in the memoir. Dr. Finch had several children, both teens and adults, some of them the children of former patients or patients themselves, living with him in his massive Victorian home. In this excerpt, Burroughs discusses how anger was addressed in the Finch household.

The most excellent fights involved five or more people. Eventually, the fight would be resolved the way all disputes were resolved:  Dr. Finch. He would be called at the office or the arguing group would travel en masse to his office, a hostile collective gang, and oust whatever patient he was seeing at the time. "Family emergency," someone would say. And the patient, whether a potential suicide or somebody suffering from a multiple personality disorder, would be transferred to the waiting room to drink Sanka with Cremora while Finch solved the dispute.

Finch believed that anger was the crux of mental illness. He believed that anger, unless it was expressed freely, would destroy a person. This explained the constant fighting in the house. Since they were tiny, the Finch children had been encouraged not just to sing , dance and jump rope but also to vent.

Anger was like the ground hamburger of our existence. Its versatility was inspiring. There was Anger Turned Inward, Repressed Anger, Misguided Anger. There were Acts Made in Anger, Things Said in Anger and people who might very well die if they didn't Face Their Anger.

I can't wait to read Margaret Robison's memoir to see what she made of Dr. Finch who, by the way, died before the publication of Running with Scissors.