Hey, all! Just a note to let you know that my mother is visiting from Portugal until 6 July so I'll be tied up 'till then and may not be able to get to blogs or answer email as promptly as usual. Happy Summer Solstice! Spotted at The Strolling of the Heifers parade and Slow Living Summit in Brattleboro, Vermont.  That's me in the reflection and the slogan isn't too far from autobiographical, either!

The Arty Side of Brattleboro, Vermont

I blogged about Brattleboro just a few weekends ago, after attending The Strolling of the Heifers parade, which highlights the area's agricultural heritage. I visit there frequently, as it is only a twenty minute drive north on the interstate.

There is another side to Brattleboro which is its artisan community and its burgeoning contemporary art scene. One of the coolest venues in the city which has been labeled "the college town without a college", is The Brattleboro Museum and Arts Center. It's quite small but not insignificant.

Last weekend, on a rainy Saturday, I met up with my blog friend from New York City, Gay Liberal Homo, who was spending  some vacation time that spanned The Berkshires to Cape Cod.

Inside the museum,I recognized "libhom" immediately by the slogan on his tee-shirt. Though he doesn't especially like having his picture taken, he allowed me to photograph his shirt!  :-) 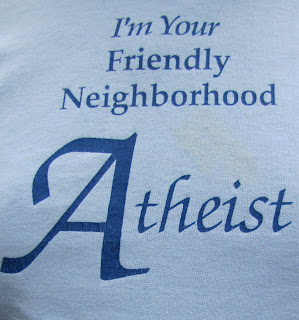 True to form, indeed!
Here is a sampling, in order of my personal enjoyment, of what we saw in the exhibit In The Zone III, a local art contest from which nine artists were chosen. The "local" criteria were that artists could be from all of Vermont or within 100 miles of Brattleboro.

There were a couple of other very good exhibits there as well. I was pleased to hear that libhom was quite impressed with what he saw. A great compliment to cow country from a long-time resident of NYC!  I love it that photos are allowed for every corner of the museum. 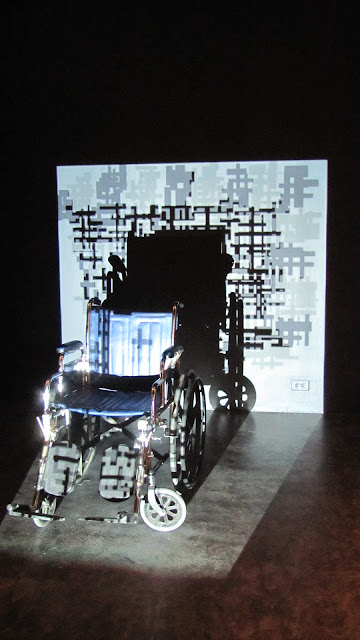 Wheelchair, 2010
projector, DVD player, wheelchair and flash animation
This installation, by Chinese-born video artist Le Xi, was quite poetic in its own way. The immobility of the wheelchair, with a backdrop of flashing projections of frantic movement. It's obviously a piece that makes more sense in motion than in a sill photo. Le Xi's work explores opposites - stillness and motion, darkness and light. Being a fan of juxtapositions of all types, I think this was my favorite thing that day. 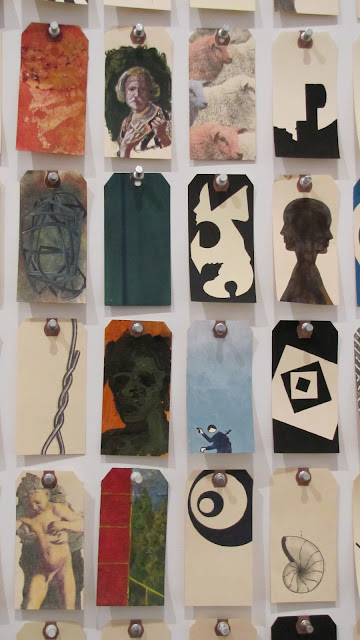 Richard Heller
(Brattleboro, Vermont)
The Republic of Illusion
1995-2011
Mixed media on oak tag
Heller buys 2 3/8 by 4 3/4 inch oak tag shipping labels and uses them as a "no fuss sketchbook substitute".
This installation was endlessly fascinating. When I return before its end on July 3, I will look at it again and again and take many more photos of the various tags, which he takes everywhere he goes and records whatever catches his eye. He then arranges hundreds of them on a wall grid, making this essentially a work in progress. The arrangement of the tags hold special significance for him but the viewer may want to draw his/her own conclusions.

In the exhibit Nature is not Your Friend - A Consideration, the paintings of Christin Couture of our very own Shelburne Falls, Massachusetts, are embellished with odd details by her artist husband William Hosie. Construction paper shapes or lines of yarn are added to the paintings. Using color as a code for the interventions (which to me are really collaborations) in Couture's paintings, the viewers eye is drawn to pause, go or stop at yellow, green and red  at specific junctures.  Couture's paintings are hauntingly Victorian, whereas Hosie's are influenced by pop art and the Beat Generation. The intersection of the two eras make for a puzzling but beautifully executed and well-integrated exhibit. 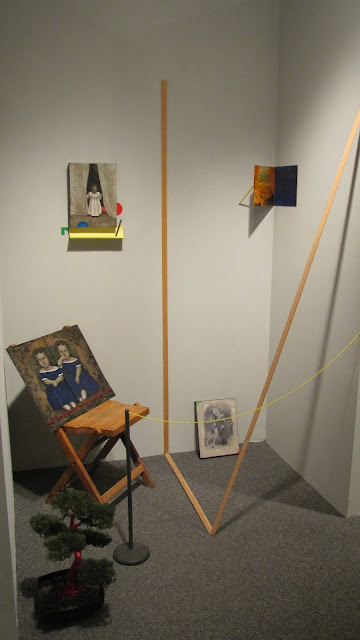 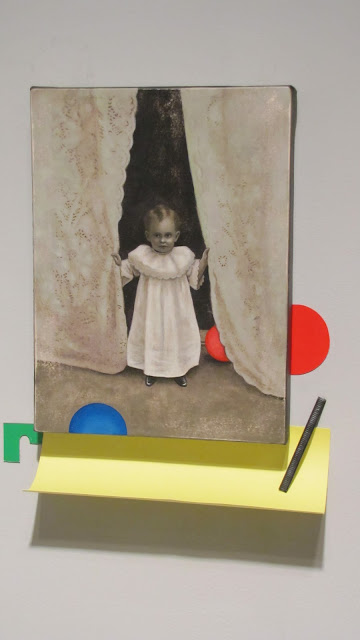 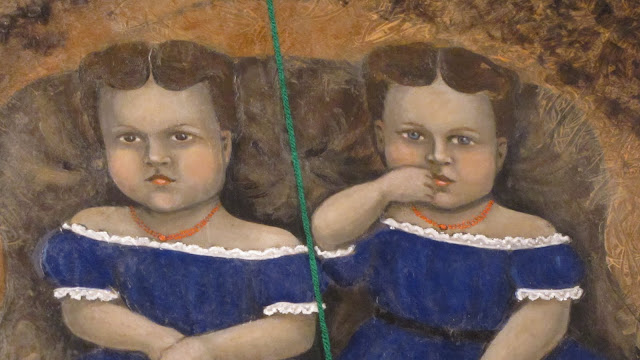 After the rain stopped, libhom and I walked up from the museum to Main Street's Gallery in the Woods, where I illegally took a few photos! We both let out disenchanted sighs over some of the very expensive art works we would purchase if we were a couple of wealthy tourists. 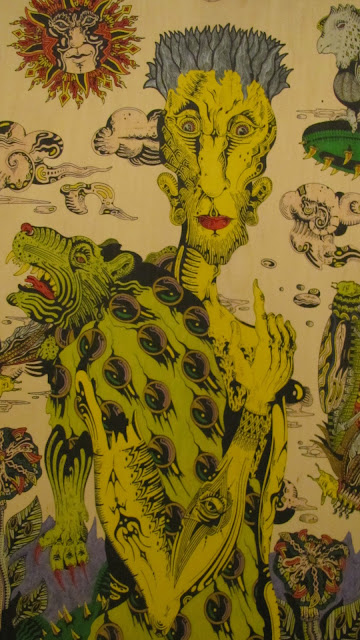 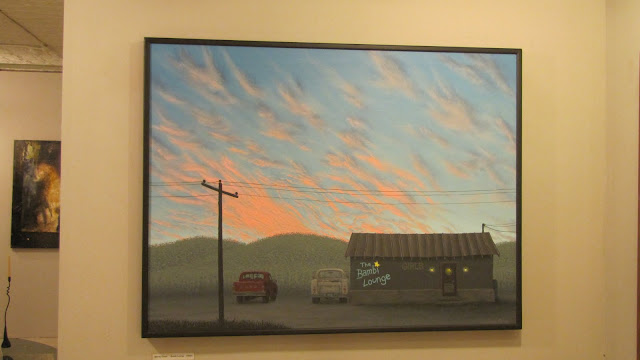 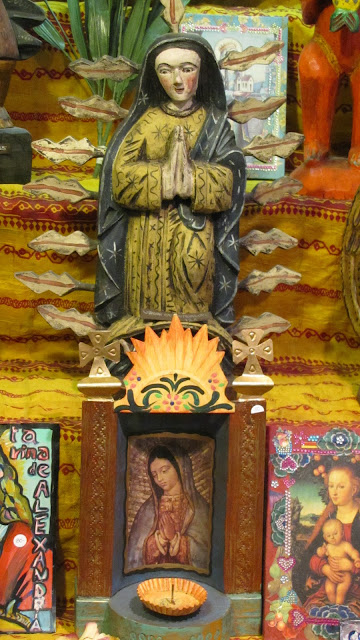 We concluded our meet-up by enjoying some good conversation over decent Thai food at Thai Bomboo. After three years of "knowing" libhom online, it was really cool to finally meet him. I wish I could have joined him in a visit to the Essex-Peabody Museum in Salem, for their recent Man Ray and Lee Miller exhibit, which was libhom's next  museum destination. That exhibition is going on until December, and I hope not to miss it, as I am a huge Man Ray fan!