Tonight's fine art nudes are all by Kees Van Dongen, whom the girls and I discovered at an exhibit at the Picasso Museum in Barcelona this summer. The three of us were smitten. I hope you will be too.

In 1897 he lived in Paris for several months. In December 1899 he returned to Paris to join Augusta Preitinger ("Guus"), whom he had met at the Academy. They married on July 11, 1901 (they divorced in 1921). He began to exhibit in Paris, including the controversial 1905 exhibition Salon d'Automne,[1] in a room featuring Henri Matisse amongst others. The bright colours of this group of artists led to them being called Fauves ('Wild Beasts'). (He was also briefly a member of the German Expressionist group Die Brücke.) In these years he was part of an avant-garde wave of painters - Maurice de Vlaminck, Othon Friesz, Henri Rousseau, Robert Delaunay, Albert Marquet, Edouard Vuillard, - that incarnated hopes of a renewal in painting stuck in Neo-impressionism. In 1906 the couple moved to the Bateau Lavoir at 13 rue Ravignan, where they were friends with the circle surrounding Pablo Picasso and his girlfriend Fernande Olivier. 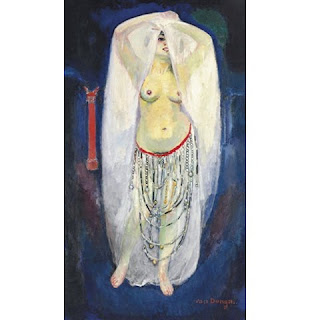 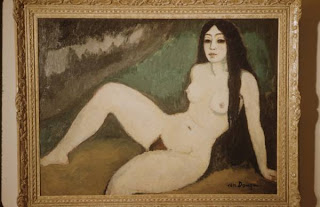 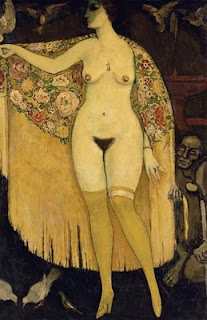 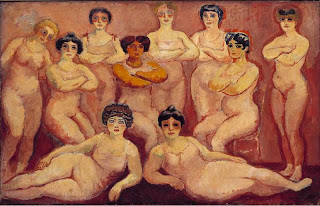 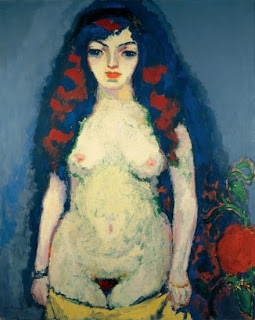 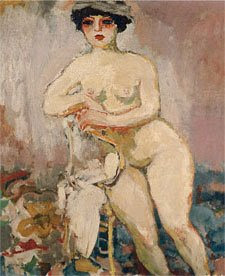 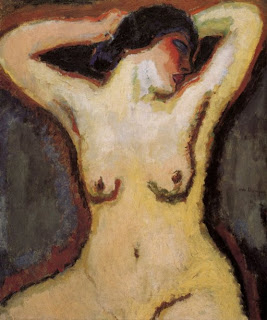 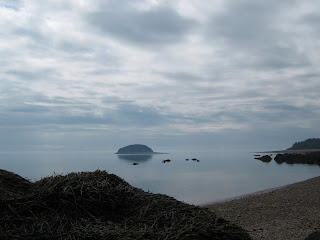 Remember what your mama told you - there would be days like these. Chin up, darlin' or we can't see your dimple! ;-)

These are the days

These are the days

These are days you'll remember

Never before and never since, I promise

Will the whole world be warm as this

And as you feel it,

That you are blessed and lucky

It's true that you

Are touched by something

That will grow and bloom in you

Nothing but love,
Mommy
Posted by Unknown at Wednesday, August 26, 2009 6 comments:

And if you still can't sleep, check out the Happy Valley's very hip radio station WRSI 93.9 FM in Northampton, Massachusetts. Cuz that's where I heard this song today when I'd long ago forgotten it.

And please, please read my healthcare post. I need the therapy!
Posted by Unknown at Wednesday, August 26, 2009 1 comment:

Email ThisBlogThis!Share to TwitterShare to FacebookShare to Pinterest
Labels: Music, Music for Insomniacs, Northampton, Radio On, The Happy Valley, The People's Republic of Northampton, WRSI

I think there is something wicked and twisted about a type of fascism that would argue against real healthcare reform as being "communist". And honestly, if this is what Americans wants for itslef in the year 2009, I see nothing to hope for in terms of a respectful future for this country.

I just visited my friend Bobbie's blog Almost There where she talks about trying to find an insurance company to pay for her medications. Whenever I read the posts Bobbie writes on her experiences as a senior navigating the American healthcare nightmare, I think about my 79 year-old mother, who has now been living back in her country of Portugal for twenty-two years.

Having previously lived in the U.S. for twenty years, my parents sold their home a couple of years after my father's company closed its doors. Literally. My father, a welder, showed with his co-workers one morning for the first shift and the gate was chained and bolted. My father was fifty-eight years old. Not entitled to his full pension. Depressed and disillusioned, he and my mother decided to move back to Portugal to salvage some of what they'd missed most about their country and to retire more harmoniously with their environment. But it was also a move that allow my parents to live more comfortably. They never endured the burden of healthcare costs because a national health program was in its early stages in Portugal in 1987. It's expensive for them, I'm sure. They're the poorest member of the EU. My parents lived much more cheaply on the amounts they were able to salvage from their pensions. My mother worked in U.S. manufacturing, too. In a small factory that made parts for electronics. Her company has long since moved South where cheap labor was plentiful. Now the cheapest labor is children in far-away countries that nobody thinks a lot about.

The real deal is that over the past five years my mother has had three major surgeries: lumpectomy, open-heart surgery and gastric cancer surgery to remove her stomach. She's doing fairly well, too. Her care has been good when she's needed the treatment or if the national doctor even knew she had a problem. Prevention is not as highly emphasized as it should be. But I have lots of family over there and they're all pretty happy with their healthcare. What it takes there is to be very vigilant about your own health care. What a lot of elders like my mother do in Portugal, is to just accept what the doctor says as the way it is and not seek more opinions or press the issue more heavily to get the care you need. With that said, I wish that type of system for my country, the U.S. and it boggles my brain that the system won't allow it. The healthcare industry is out of control. All the corporations are out of control and Americans are allowing it to happen. At least enough of us are buying the lies and propaganda that something as basic as healthcare is being denied us in the interest of profits. I'll tell ya, it ain't freakin' fair. It's wrong.

Large numbers of people having to declare bankruptcy over out-of-control health costs. Not to mention people without insurance being denied care or not accepted by insurance companies for pre-existing conditions. It's criminal.

And while I'm on a rant I'll just mention how disappointed I am in President Obama for not having the guts to stand up to the good 'ol boys and get the troops home from Iraq like he promised. Hats off to Russ Feingold for recently taking some leadership on Iraq. I should give you a link, shouldn't I? It's easy enough for you to search. Come on, humor me. It's not often I go on political rants. Not on the blog but lots of live action at home! Some activist...

And if you've made it this far, it's the rainbow after the storm (lalalalala). The Nova Scotia slidehow that is. It's going up as soon as I can make it happen.

This year's trip netted us some cool new finds on the beautiful Fundy Shore. We had excellent weather, beyond the first day we spent in the Spencer's Island area, when it was somewhat overcast and on the cool side. We visited this location last year but this was our first time camping here. 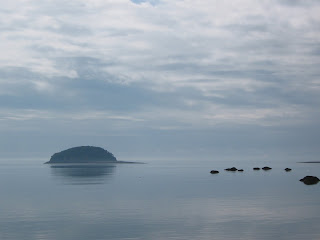 Spencer's Island, as seen from the campground. Once seasonally used but no longer inhabited.

Ron, the local gentleman pictured below (with dog Tinker) told us this crazy story about a local restaurateur who packed up his sheep flock and brought it to Spencer's Island for the summer, thinking how low-maintance they would be with plenty to eat and drink, only to discover when he went back for them, that they'd turned rouge and refused to cooperate when he tried to round them up. As legend has it, "he had to shoot 'em all so they wouldn't freeze over the winter". Hmmmm, you say? Well, Nova Scotia is a quirky place. 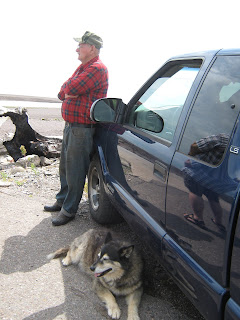 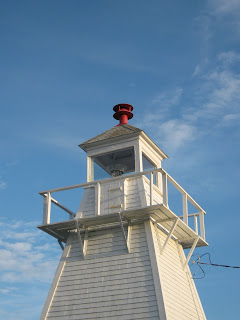 Spencer's Island Lighthouse
(dates back to 1904)

We hiked down a couple of very steep trails to two beautiful waterfalls to spend the hot afternoons. There are several more waiting to be discovered next year when we go back. See the post entitled Postcards from Nova Scotia for a waterfall picture.

And as if beautiful hot, sunny, relatively dry weather, good company and beautiful scenery weren't enough, we stumbled on the icing in the form of a blurr of brightly painted yellow concrete as we motored by The Charles McDonald Concrete House Museum and Sculpture Garden in the Annapolis Valley village of Centreville. We went to check it out, of course 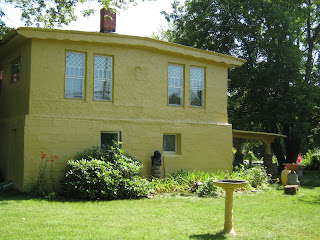 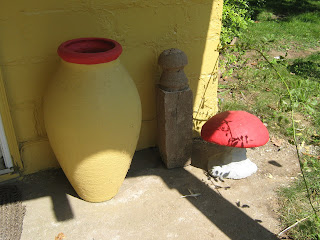 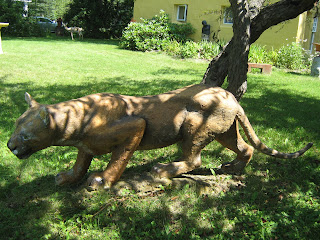 and discovered the world of Nova Scotia folk artist Charles McDonald - a painter, builder, sculptor, sailor and socialist, who died in 1967. We were smitten with the quirkiness and character of the museum which was once Charles' and his wife Mabel's main home. We found out about several of the cottages that were also built by Charles McDonald in nearby Hall's Harbor and went to visit three of those as well. 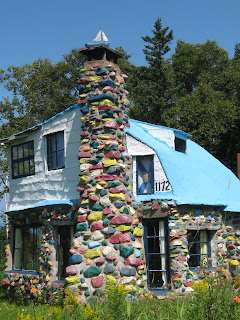 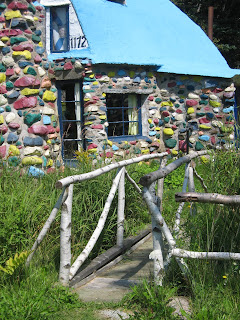 Charles McDonald's cottages are often called "faerie houses". This is was referred to as The Blue Cottage, by Mr. McDonald's grand-nephew who arranged a tour of the inside for us. It's the absolute most charming and original little house I've ever seen; both outside and in. The chimney is made from painted rocks, there is an outdoor toilet and shower and it's a stone's throw to the beach, which we went directly to after our tour of the cottages. And the fireplace works. And there is a tiny balcony off the bedroom with a view of the beach below. 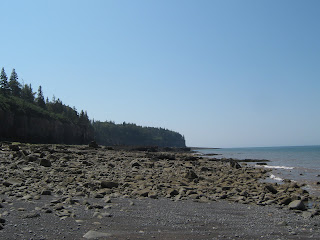 So guess where we're staying during next summer's visit to Nova Scotia? Yes. We fanagled a two week stay. I hope the faeries can keep themselves amused until we arrive, because I don't know how I am ever going to wait. I am happier than Mona Lisa, who was intepreted by "science" as being "83% Happy". Wait. Or was it 86%? I dare say for the first time in my life, I feel charmed. And I think it does have to do with faery magic, though I'm not quite sure how. ;-) 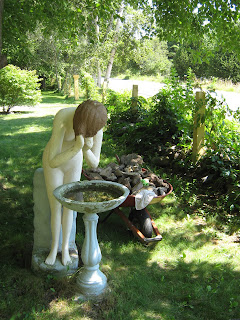 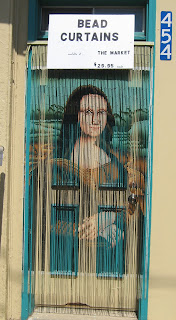 You Know How That Mona Gets Around
Taken in Wolfsville, Nova Scotia

I'll be putting up a slideshow of our trip which will include more photos of the McDonald museum and cottages. 'Till then...

Music for Sunday - The Abrams Brothers

These boys took my heart when WP and I saw them perform in Nova Scotia earlier this week.
Posted by Unknown at Sunday, August 23, 2009 3 comments: