Futurism, an Italian movement, made its debut with the publication of its manifesto, written by poet Filippo Marinetti, on the front page of le Figaro in 1909 and began to subside in 1918, just as World War I was starting. This art movement preceded that of Dada about which I wrote in this post. Futurism, in fact, influenced many other 20th century art movements including Art Deco, Vorticism, Constructivism and Surrealism. 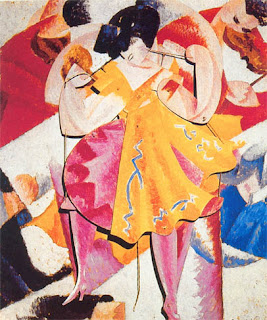 The futurists believed in the powers of technology which would usher the world into the future. They were concerned with movement and depicted their preoccupation in painting. For example, using vibrant colors and  flowing brushstrokes, the Futurist painters attempted to experiment with the photographic technique by breaking motion into small sequences and using a wide range of angles to capture the essence of time and motion within the painted image.

Futurists mixed activism and artistic research. They organized scandalous events that expressed their rage at antiquity. A primary goal of the movement was to eschew the old society and usher Italy into the age of modernity. Certain Futurists promoted themselves to try to join forces with the Fascists, who were just coming into power. But Mussolini showed a preference for the Novecentro Italiano movement of artists who identified with and promoted the classical order of Italian heritage and history.

Futurism was not , of course, solely a movement of painters. Like most art movements their ranks included sculptors, poets, writers and musicians. This post is primarily concerned with the painters and a bit with the sculptors who were a part of the Futurist movement.


One of the leading painters of the Futurist movement is Gino Severini. For years I've been looking at certain of his paintings here and there but it's only recently that I took his name from my list of artists to explore further and ran smack into what's become a significant effort on my part to learn about and understand Futurism and put it into a historical context.

As a resident of Paris from 1906, Severini served as an intermediary between his Futurist colleagues in Italy and his friends among the Parisian avant-garde, dominated at this time by Cubism. Severini was to return to Cubist themes in his later works.

The theme of dance was among the stronger influences of Severini's artistic imagination. Dance was for him an icon of modernity. It served as a metaphor for the exploration of new forms of physical and psychological involvement of the spectator. 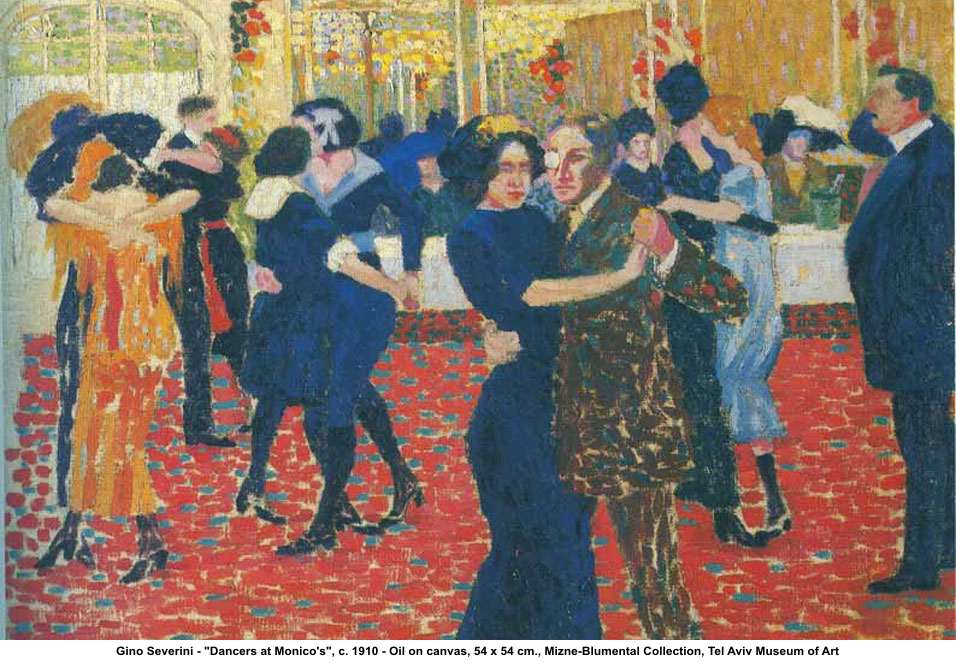 "One of the main causes of our artistic decline lies in the separation of art and science."
~Gino Severini


Severini later abandoned any recognizable human form in favor of depicting movement in dance exclusively through abstract forms and color.


Let me move on to another of Futurism's most influential painters, Umberto Boccioni (1882-1916 ), who was the main theorist of the movement.

“While the impressionists make a table to give one particular moment and subordinate the life of the table to its resemblance to this moment, we synthesize every moment (time, place, form, color-tone) and thus build the table.”  ~ Umberto Boccione


(The following three images are paintings and one sculpture by Umberto Boccioni).

The Street Enters the House
1911 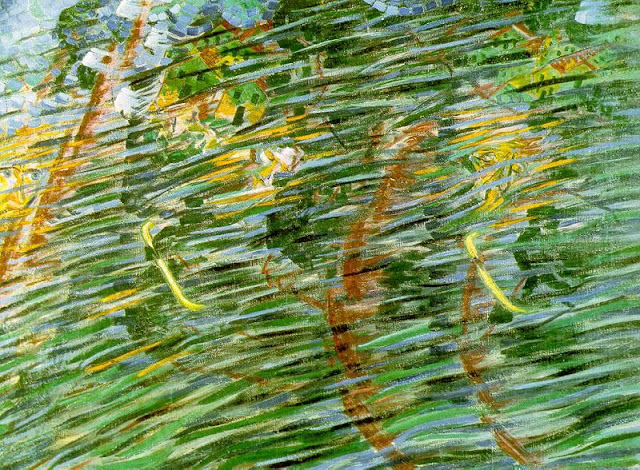 Giacomo Balla (1871-1958) spanned the first and second, post-war wave of Futurism. Both Severini and Boccioni were his students. Balla's style changed remarkably with the adoption of Futurist dictates of light, movement and speed. Or perhaps his personal leanings as a painter coincided with the ideas of the Futurists. Balla's paintings addressed the themes of work and humanitarian concerns, reflecting is Socialist politics. Throughout his participation in Futurism, Balla celebrated the machine and captured figures and objects in motion. Repeated sequence of movement were Bella's vehicle for depicting movement. In the painting below,  Dog With Leash, Balla recreates a sense of movement, speed and light via superimposed images.

Abstract Speed - The Car Has Passed 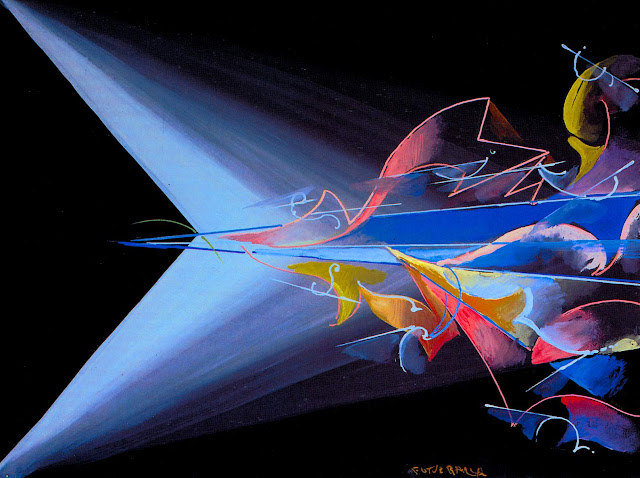 The Futurist movement included a handful of Russian artists, the best of which is the only woman in the entire group, including the Italians - Natalia Gonchorova. Futurism also influenced American artists such as Italian-born Joseph Stella.
Posted by Unknown at Sunday, October 28, 2012 17 comments: