Linking to a lot of Photo Memes

Our end-of-the-year trip to Mass MoCA
Up the Mohawk Trail from Greenfield up through the foothills over the Berkshires and into the town of North Adams, home of the Mass MoCA - the Massachusetts Museum of Contemporary Art. 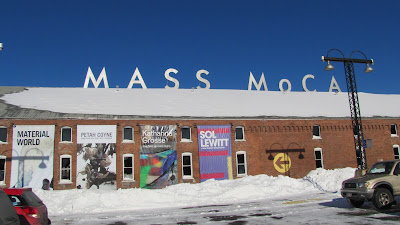 Above is the Sign, Signs contribution
In the Building 5 Gallery: 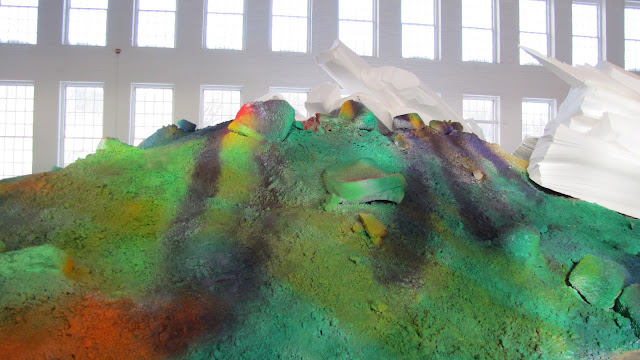 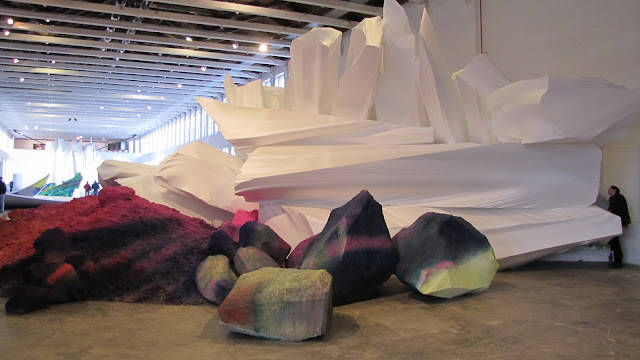 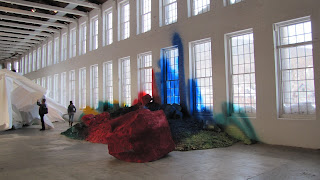 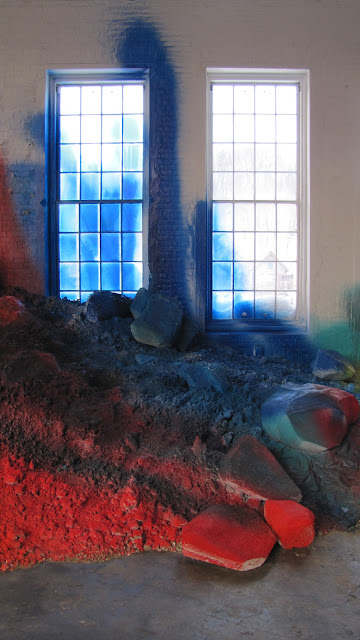 Above images:
Katharina Grosse: One Floor Up More Highly 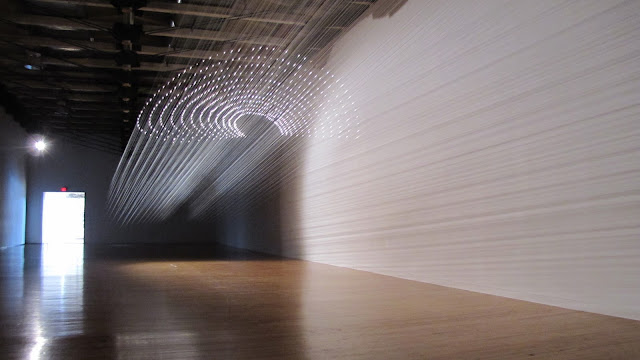 Tobias Putrih
Re-Projection:  Hoosac
2010
And coming on January 4, a new photo meme called Signs Signs, hosted by Lesley, to which I will be linking. 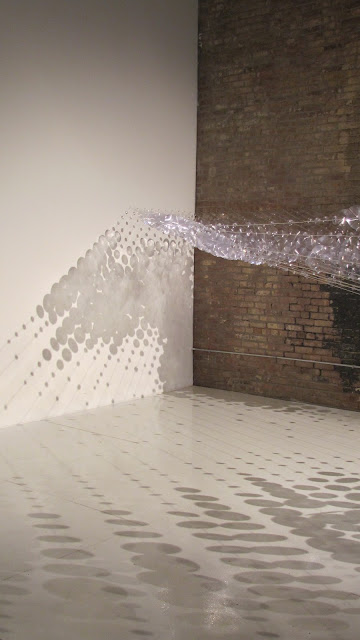 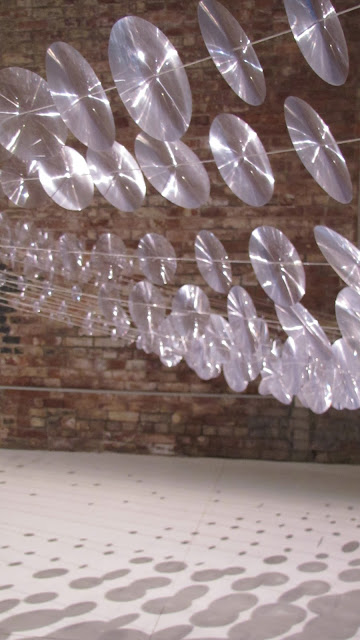 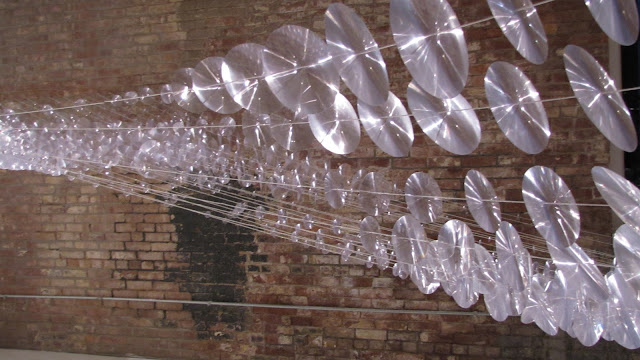 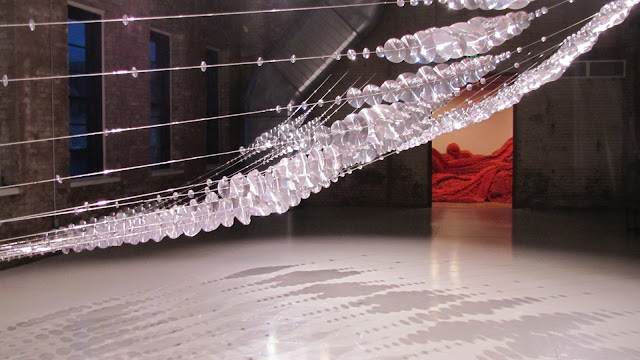 Alyson Shotz
The Geometry of Light
2010
What is the red thing behind the door in the photo above, you ask? 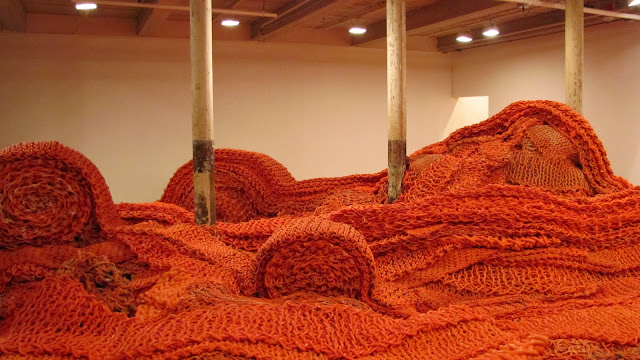 Orly Genger (b. 1979, New York)
Big Boss, 2009–2010
Rope, paint
Created with 100 miles of knotted rope Orly Genger’s installation commands the space
with a towering wall that bursts through the architecture and falls into a riotous spill
of material. Forcing viewers to rethink their path, the distinct elements articulate
the structural potential and strength of the rope as well as its softer side. Genger’s
work often grapples with a male-dominated history of sculpture and with the legacy
of artists such as Tony Smith and Richard Serra. Hand-working her industrial material
in an adapted crochet stitch, Genger introduces a traditionally female-identified
craft process into an artistic idiom associated with a certain muscular bravado. Yet
Genger’s own process — which has her wrestling with large amounts of the heavy
material — is overtly physical. (Images of body-builders are pinned to Genger’s studio
wall). The “Big Boss” of the title might refer to the labor the rope demands of Genger,
or perhaps to her mastery over the material. Painting the rope a vivid red, the artist
matches the material’s presence with an equally forceful color. 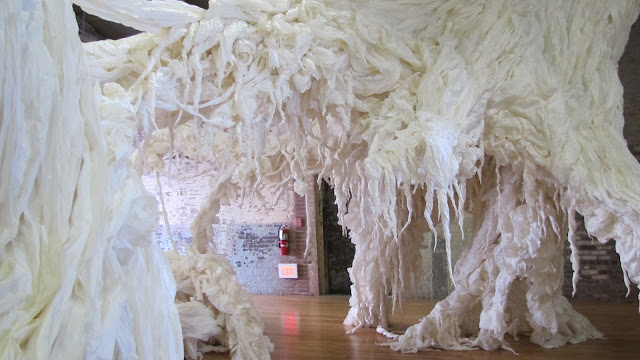 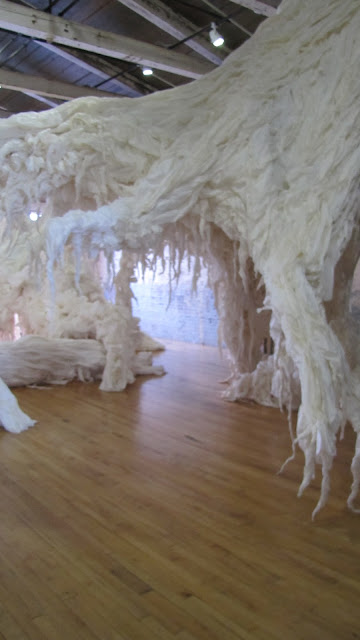 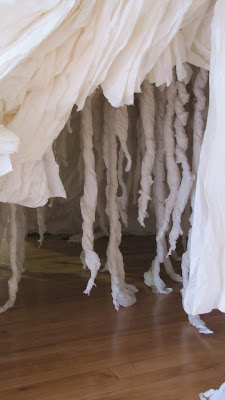 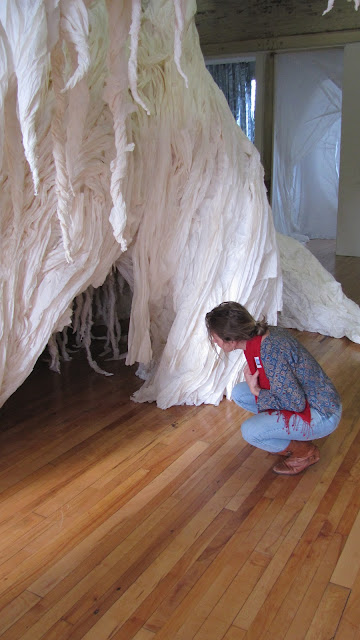 Wade Kavanaugh and Stephen B. Nguyen have been working with paper since their
first collaboration in 2005. The versatility of the material — which can be flat or
volumetric, smooth or textured, buoyant or heavy — allow the artists a wide range of
possibilities for their large-scale installations which they describe as “investigations
of the uncertain territory between imagined and physical space.” At MASS MoCA the
duo has responded to the museum’s industrial, brick architecture with its imagined
opposite: a fantastical, old growth forest fashioned from twisted, crumpled, and
draped rolls of paper. The ghostly image of the decaying natural landscape, however,
mirrors in some way the fading industrial landscape embodied by the museum’s
repurposed factory spaces. Spanning two floors, the installation appears to grow from
one gallery to the next, joining the separate spaces and providing viewers a different
perspective on the labyrinthine building.

"The arc of the moral universe is long but it bends toward justice."
~Martin Luther King Jr.
Love and compassion is the Universal religion. That is my religion.
~ The Dalai Lama

Comments
"The secret of life is in art."